As the walk is now entering what is home territory for many of you, dear readers, I sent out an email to see if anyone wanted to join me. Some of you came up with inventive excuses for not coming out: having operations, night-shifts, living in Australia etc etc., but Gary couldn’t think of anything quickly enough so the two of us headed out from Staines railway station back to the point where I last left the route all that time ago. 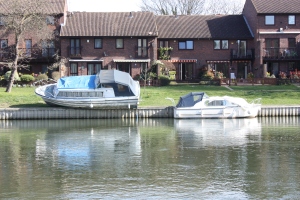 We crossed the bridge at Staines, headed north-west, and soon arrived at Runnymede, the approximate site of the signing of Magna Carta just 800 years ago. I read the inscription on the stone monolith and pondered the significance of this great historic event where the king, bishops, archbishops and barons came together to create “The Great Charter of the Liberties”. Meanwhile Gary was busting for a wee so went in search of a loo.

Dobby lives in a cage beside the towpath in Old Windsor. Dobby is a European eagle owl; a massive bird for whom the cage seems rather small. I’ve seen him a number of times; sometimes he will hoot at passers-by, but on this occasion he was not feeling talkative. Aside from captive birds, there also many more of the green parakeets around here. There are a number of theories about how exotic birds came to be living successfully in the area – including that Jimi Hendrix had released a pair in the 1960s, or that some escaped from Isleworth studios during filming of The African Queen.

Not far from Runnymede we came to the man-made Ham Island. The bit of the river we walked here is actually a cut which was dug to bypass a large meander in the actual river. There are still private houses on the island – they suffered badly in the floods of 2014. 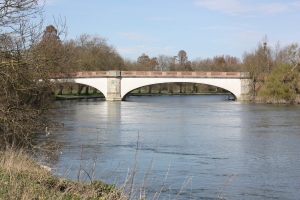 We crossed Albert Bridge and headed towards Datchet. Here the path leaves the river, goes around a field and then joins the B3021. But eventually we got back to the river and sat on a bench with a view of Windsor Castle and had some lunch. As usual, my walking companion was much better prepared than me in the catering department, so I was pleased to share Gary’s packed lunch. I can’t remember what I had to offer in return; a satsuma probably.

Re-energised we carried on through woods where half the trees had been cut down and then crossed the river for the last time today. From there we were again in open land alongside the river. We skirted around the playing fields of Eton where, according to a popular mis-quote, the Battle of Waterloo was won. There wasn’t much playing or battling going on when we were there. 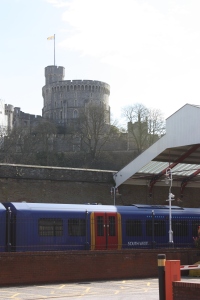 The final section of this leg took us alongside the railway, through boatyards and the station car park to Windsor Riverside Station, where our walk ended. This had been a short leg but having been out of the game for a while I knew that I had been on a walk. I bought an over-priced and disappointing sandwich at the station and we boarded the train back to Staines.