For much of the train journey I was accompanied by people wearing wellies, and day-glo makeup, and flowers in their hair. Festival-goers either heading to the site for a day’s fun, or heading back home for a shower after last night’s fun. And a very drunk man (at 9am. Not judging, just sayin’…) whom I told to get his feet off the seat so that I could sit down. He was slouched on a half-empty (half-full? Was he an optimistic drunk?) bottle of whisky. Had I realised how drunk he was I might have just sat somewhere else. Not for the fear of violence but the fear of vomit. But happily he managed to keep it down until I left the train at Maidenhead.
At Marlow, I started walking. A bit of to-ing and fro-ing to start off with because, being a pedant, I had to walk back to the point where I last left the river before doubling back and continuing upstream. Also, Marlow is a bit unusual in that walking from A to B often involves narrow, high-sided alley-ways of the sort that those of a nervous disposition would take long detours to avoid. But, once west of the bridge you’re back on the tow-path and all is well.

This was a sunny weekend and the good people of Buckinghamshire were doing that very English thing of “messing about on the river”.
“There are tillers and rudders and anchors and cleats,
And ropes that are sometimes referred to as sheets.
With the wind in your face there’s no finer place,
Than messing about on the river.”
Me, I was striding purposefully alongside the river. As were quite a few other people, and I am happy to note that cheery greetings were plentiful. Despite my wearing sunglasses (see notes from leg 3), joggers, dog-walkers, cyclists and fellow walkers were ready with a smile and a hello.

West of Marlow I passed Bisham Abbey on the opposite bank. This is the “National Sports Centre” where the England football team regularly meet to train in the art of disappointing a nation. The venue is also licensed for weddings and a group of people were busy decorating an arch by a pier where – presumably – a bride and groom were to depart following a wedding ceremony. I wish their marriage greater success than the England football team. I hope they don’t look back saying “Well, it was great 49 years ago, but it’s been rubbish ever since”. 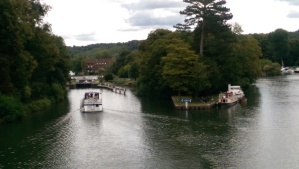 At Hurley you have to cross the river three times before you can continue on your way on the southern side of the river. After the first crossing I came across a field full of calves. Is it OK to describe baby cows as pretty? Well they were, but why there were so many of them – with no adult cows to supervise them – in one field, I can’t imagine. The third crossing was via a high and long wooden footbridge that was surprisingly wobbly. Well it was when I was on it anyway. Hurley also boasts a fine old coaching inn in “Ye Olde Bell” which is a lovely place to spend a couple of hours, but I was on a mission and would not be tempted. 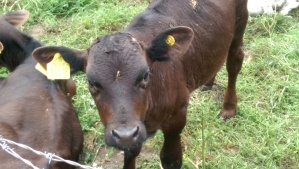 A bit further on and the path had fallen into the river – like coastal erosion but not at the coast – so there was a diversion. Having been walking along in awe of the massive riverside mansions, the diversion took me through a caravan park. Well not caravans, but “mobile homes” or “statics” (there’s a contradiction right there). But absolutely immaculate mobile homes with manicured gardens. When all six numbers come up – which they surely must do soon – I might plump for a riverside static rather than the mansion. At the very least, they seem to be safe from actually falling into the river.

Urs Schwarzenbach, who has more money than I would have if all six numbers came up every week for a year (or a decade for that matter), owns Culham Court, a serious mansion at Aston. Some years ago I had a slight run-in with a couple of his minions when I parked my Ford Escort on his land in order to have a picnic down by the river. But let bygones be bygones, I decided that I would once again walk on his land. Now, he has decided that he will not allow people to walk alongside the river on part of his land and has therefore diverted the path. You might think he would do this to protect his privacy but strangely the diversion takes the path about as close to the manor house as you could possibly get. Yes, the cameras follow you every step of the way, but you get a good view of the house and its windows every one of which has a drawn blind… sinister… The diversion took me by The Flower Pot, another cosy pub which I again resisted as I made my way back to the riverside. Aston is one of the areas where red kites have been very successfully re-introduced. It is also the site of some smallholdings so it is usually possible to see the spectacle of nervous-looking chickens scratching around while hungry-looking kites circle above.

At Hambledon Lock, which is probably less than a mile from The Flower Pot, I was approached by a man who asked me whether there was a pub nearby. Well yes there is I replied and directed him to The Flower Pot. “Thank you” he said, “I live just over there and I’ve heard people mention it, but I’ve never been…”. Maybe it’s just me, but whenever I have moved house I have pretty quickly sussed out all pubs within walking distance. Ok – just me then.

Henley is another of those areas which has been very familiar over the years. Happy memories of regatta time as a teenager… not so happy memories of someone knocking the wing mirror of my Dad’s Chevette van. And memories of a few years later working in the town when we were all young and carefree and well-paid. Happy days. I stopped to buy lunch at the Patisserie Franco-Belge which was always a favourite, but it’s not like it used to be. Nobody French or Belgian for a start. I ate my sandwich in the riverside gardens by the bandstand where, in all these years, I have never seen a band. Fortified I carried on to Shiplake and past (again, without stopping) the Baskerville Arms. This used to be a regular Friday lunchtime haunt when I worked in Henley, although we knew it as “Harry The B***ard’s”. Because the landlord was called Harry, and he was a b***ard. He shouted at children and denied that his beer was off even when it looked like riverwater and tasted like vinegar. Happy days indeed.

And finally, for today, to Sonning. There is a row of cottages in Sonning called “Robert Palmer Cottages”. The lights were on, but no-one was home.

No sign yet of the spoon gorilla at Uri Gellar’s place, but I daresay it will be installed soon. And he does have an amusing sign on his back fence.

On the opposite bank, George Clooney has had a big fence installed at the end of his garden. I can understand him not wanting people gawping at him, but what is the point of having a riverside mansion if you can’t see the river? Maybe he just really enjoys going to The Bull for a pint. In that one respect I am very much like George Clooney. I walked over the bridge and through the churchyard to The Bull. Now at the end of the day’s mission I could give in to temptation – I can resist anything except temptation – and sank a long cool pint of…. water. Soon followed by a pint of London Pride. Happy days.