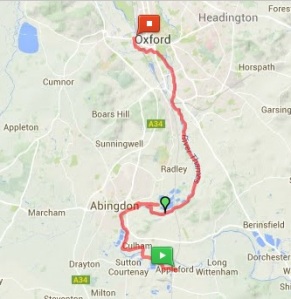 A relatively short sprint to Oxford on this occasion, the reason for that being that Oxford is the last railway station on the route. So the luxury I have enjoyed since Southend – that of always having an easy exit at the end of each leg – is now gone. I will now have to rely on having a walking (and driving) partner in order to do a park-and-walk. Hint hint. Ahem, anyone there?

I parked at Appleford and made my way to my starting point back at Culham Lock. The landscape was frankly desolate until I reached the river. I stopped to adjust my bootlaces and check the map. A buzzard circled overhead; I decided I’d better keep moving. 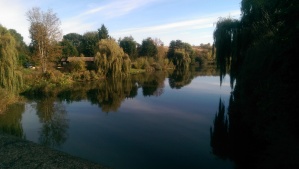 I know I tend to go on a bit about anglers but they are probably the greatest users of the River Thames. Certainly fishing is the most popular participation sport in the country, and this was very evident as I approached Abingdon. Apparently there was a competition going on as every available space on the riverside was occupied by an angler with the most elaborate equipment I’ve ever seen. More rods than you could shake a stick at. Most of them had fishing platforms to sit on, and some had even placed their platforms several feet into the river to get closer to the fish. Much of their equipment was emblazoned with the logos and names of impressive-sounding teams and sponsors, and I could tell that these were highly skilled practioners as some of them were catching fish. But the prize for the biggest fish I saw pulled from the river went to the last man in the row as I approached Abingdon lock. This was a man with one rod and nothing else, and he caught a fish about twice the size of any others I had seen.

From what I could see of it, Abingdon looks to be an attractive town. It is one of a number of places claiming to be “Britain’s oldest continuously occupied town” having had people living there for 6,000 years. These days it is something of a dormitory town, since the car plant closed. As did the brewery and two leather works. And the cinema. But it is certainly not a town in decline, it is thriving.

Having crossed the river at the lock I became concerned because I expected the path to stay close to the river and it didn’t, and there were buildings I didn’t expect. It was a very clear path, but I thought I’d better check with someone so I asked the next person who came along whether the path would take me back to the river. He replied in a very broad Geordie accent that it would – “down to the end, turn right and that will take you to the river”. So I marched on. And on. Until it became blindingly obvious that I was going in the wrong direction and getting further and further away from the river. Angrily I turned around and marched back again, cursing Geordies all the way – what can they possibly know about Oxfordshire? – right up to the point where I came to the turning I had missed and which my Geordie friend had accurately described. I took back all my curses, and re-joined the correct path feeling a bit of a numpty.

Nuneham House rises impressively above the Thames east of Abingdon. What is less impressive is the fact that the first Earl Harcourt demolished the entire village of Nuneham Courtenay because it got in the way of his plans for landscaping his gardens. He did recreate the village alongside the A4074 but even so it must have been tough having your home flattened because the rich man from the big house wanted to plant his begonias there. The house is currently used by the Brahma Kumaris World Spiritual University; I doubt they would approve of horticultural village-destruction.

Heading north, everything became quiet. Eerily quiet. No-one was about and there were no boats. The river had narrowed to the point where I could easily have lobbed a pebble from one side to the other, and yet it hardly seemed to be flowing at all.

The sense of splendid isolation continued for several miles. A couple of fishermen, a couple of walkers but that was about it. I came across a pair of elderly ladies studying a map and asked if they were OK? Were they lost? “No” one of them answered, “how can you get lost alongside a river?”. Fair point, but I’ve managed it a couple of times… 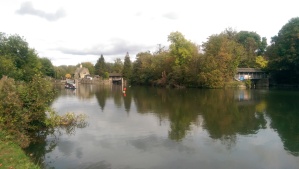 Suddenly at Sandford there were a lot more people, walking on the path, paddling canoes on the river and eating lunch and enjoying cool pints at the pub. From this point rural Oxfordshire became more and more Oxford. The city of perspiring dreams

The Head of the River pub on the outskirts of Oxford was the scene of one of only two outings in my short-lived dongola racing career. Dongola racing originated with a 370 mile race between batallions of the British Army on the Nile, passing through Dongola in northern Sudan. These days it is limited to much shorter distances at local regattas on the Thames, and involves teams paddling punts. Our team was called “The Bear Behinds”, apparently because we had some connection with The Bear pub in Oxford and because someone thought that “Bear Behinds” was a good pun. Or maybe they realised that we’d be behind everyone else and would therefore be eliminated in the first heat, as we were. The event was held in the middle of summer and therefore the rain was torrential; had we capsized we would not have got wetter. It also happened to be the day of my sister’s birthday celebration and I returned home to find my Dad – with proper British stoicism – under a canopy in the garden cooking a barbecue. While the guests, along with the birthday girl and the rest of the family, watched through the dining room window. “We said it would be a barbecue, so we’re flippin’ well going to have a barbecue…!”

As you can see from the map, today’s walk was almost entirely northerly, with the result that I only added about one mile to the crow-flying distance done and took nothing off the crow-flying distance to go. After Oxford there is a little bit more north and south but then the rivers heads almost directly westwards, so progress towards the actual destination will be much quicker…